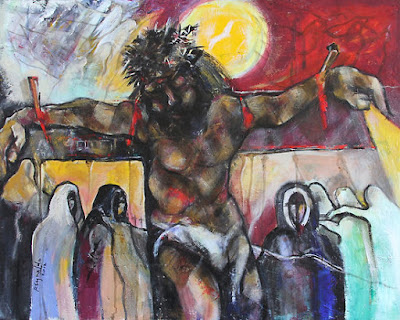 As they led Jesus away, they seized a man, Simon of Cyrene, who was coming from the country, and they laid the cross on him, and made him carry it behind Jesus. A great number of the people followed him, and among them were women who were beating their breasts and wailing for him. But Jesus turned to them and said, “Daughters of Jerusalem, do not weep for me, but weep for yourselves and for your children. For the days are surely coming when they will say, ‘Blessed are the barren, and the wombs that never bore, and the breasts that never nursed.’ Then they will begin to say to the mountains, ‘Fall on us’; and to the hills, ‘Cover us.’ For if they do this when the wood is green, what will happen when it is dry?” Luke 23:26-31

Weep not for me my daughters
I leave this world of woe to you
the Incarnate one was close among you
the world rejected the love showered down
rulers trumped up charges in their anger
the followers of our sovereign remain
though they hated me the very most.

Find shelter for yourselves and the beloved
they will come for you another day as well
they will see you as a threat and hostile
they will vilify you, a noose around  your neck
they will abandon all kindness and civility
until you no longer make them ashamed.

O Daughters of Jerusalem the seeds sown
within you will never die yet other hate
and hate they must for it gives them power
or so they think to conquer and destroy
they will tear at your flesh like dogs
in their fury they will strike blows
as angry small children not getting their ways.

Posted by mamabishop at 5:32 AM