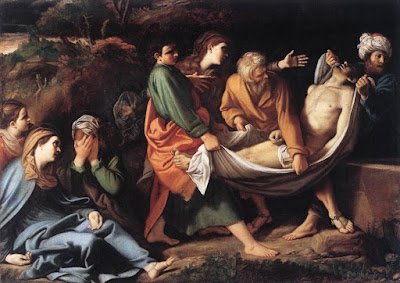 It was now about noon, and darkness came over the whole land until three in the afternoon, while the sun’s light failed; and the curtain of the temple was torn in two. Then Jesus, crying with a loud voice, said, “Father, into your hands I commend my spirit.” Having said this, he breathed his last. When the centurion saw what had taken place, he praised God and said, “Certainly this man was innocent.” And when all the crowds who had gathered there for this spectacle saw what had taken place, they returned home, beating their breasts. But all his acquaintances, including the women who had followed him from Galilee, stood at a distance, watching these things.
Now there was a good and righteous man named Joseph, who, though a member of the council, had not agreed to their plan and action. He came from the Jewish town of Arimathea, and he was waiting expectantly for the kingdom of God. This man went to Pilate and asked for the body of Jesus. Then he took it down, wrapped it in a linen cloth, and laid it in a rock-hewn tomb where no one had ever been laid. It was the day of Preparation, and the sabbath was beginning. The women who had come with him from Galilee followed, and they saw the tomb and how his body was laid. Then they returned, and prepared spices and ointments. On the sabbath they rested according to the commandment. Luke 23:44-56a

Turning over the present and future is a daily spiritual discipline for me. I like to plan ahead and like things to go smoothly and predictably.  And yet, I know I am not in control and the more I let go and let God, the less stress, worry and anxiety I live with. Somewhere in the middle of the day, or by evening's end, I have found a way to take back all the burdens I have put on the Creator in morning prayer. It is a very human thing and a very hard spiritual discipline for me to master.

Jesus dies on the cross but not before he turns over his eternal spirit, as a child might fall to sleep in a parent's arms. Despite the pain and human struggles, he let go to God so that a change might come in the whole human narrative. Life was winning out over death even as he was dying. And we have a symbol too, for letting go of control and turning even death over to our Creator. We can let go at all times, knowing God has more in store than we can even imagine.

Today, I ask God to help me let go of the things that keep me bound and fearful. May we turn over all our worries to God, so that we might know life breaking into death and light conquering all our darkness.
Posted by mamabishop at 5:49 AM