Laid In A Tomb 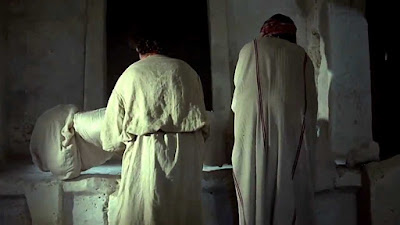 When it was evening, there came a rich man from Arimathea, named Joseph, who was also a disciple of
Jesus. He went to Pilate and asked for the body of Jesus; then Pilate ordered it to be given to him.
So Joseph took the body and wrapped it in a clean linen cloth and laid it in his own new tomb, which
he had hewn in the rock. He then rolled a great stone to the door of the tomb and went away.
Mary Magdalene and the other Mary were there, sitting opposite the tomb.


The next day, that is, after the day of Preparation, the chief priests and the Pharisees gathered before
Pilate and said, "Sir, we remember what that impostor said while he was still alive, `After three days
I will rise again.' Therefore command the tomb to be made secure until the third day; otherwise
his disciples may go and steal him away, and tell the people, `He has been raised from the dead,'
and the last deception would be worse than the first." Pilate said to them, "You have a guard of
soldiers; go, make it as secure as you can." So they went with the guard and made the tomb

Laid in a Tomb

Away from the daylight
sealed away for eternity
lying on a rough marble slab
life began again for all.

In the darkness of the waiting
grief and fear all wrapped around
the body that was recently living
now awaits a new unknown thing.

In this damp and dreary place
a funeral pall as our garments
our tears as our sustenance now
we fail to hear the breaking dawn.

Yet dawn will break magnificently
we will know warmth once again
we will see the One carried away
transformed again by divine love.

Posted by mamabishop at 7:22 AM