Under the Fig Tree 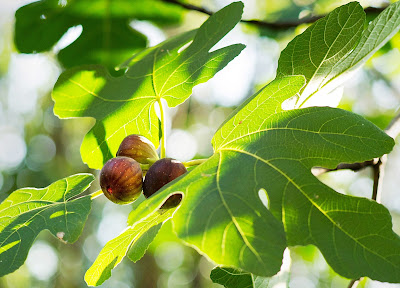 The next day Jesus decided to go to Galilee. He found Philip and said to him, “Follow me.” Now Philip was from Bethsaida, the city of Andrew and Peter. Philip found Nathanael and said to him, “We have found him about whom Moses in the law and also the prophets wrote, Jesus son of Joseph from Nazareth.” Nathanael said to him, “Can anything good come out of Nazareth?” Philip said to him, “Come and see.” When Jesus saw Nathanael coming toward him, he said of him, “Here is truly an Israelite in whom there is no deceit!” Nathanael asked him, “Where did you get to know me?” Jesus answered, “I saw you under the fig tree before Philip called you.” Nathanael replied, “Rabbi, you are the Son of God! You are the King of Israel!” Jesus answered, “Do you believe because I told you that I saw you under the fig tree? You will see greater things than these.” And he said to him, “Very truly, I tell you, you will see heaven opened and the angels of God ascending and descending upon the Son of Man.” John 1:43-51
I feel blessed that we had a fig tree in our yard growing up. The trunk was thick and twisted and the leave wide and shady. It was a perfect place to hide, to read and to think. I could watch the world go by in safety. The figs, which became ripe towards the end of the summer, were sweet and gritty, full of flavor and goodness. I don't need to close my eyes to see and feel that place, although it is long gone and I wouldn't fit there now anyway. It is a place of rest and reflection, a grand study hall in the great outdoors.
Nathanael was skeptical about Jesus and the claims his friend made about him. He wanted to see for himself. What he encountered was a man who knew him at his core. Jesus knew that Nathanael was a man of thought and contemplation, a man who asked the hard questions and wasn't afraid to wonder out loud. Nathanael thought himself to be very clever, but he was found out. And he was found by Jesus who he followed from that day on. We are all those who think we are clever and sneaky, yet God knows us for who we really are - the children hiding under the fig tree watching the world going by and wondering. God invites us to come and be loved beyond measure as we truly are and completely.
Today, I ask God to help me live as one who is loved and known completely. May that love, that has showered down upon us be shared with the world, with people who have been hiding for fear of ridicule, rejection and cruel judgement.

Posted by mamabishop at 6:01 AM